Just got news from my mother. She has arrived in Christchurch on her way to becoming a Granny Au-Pair in Dunedin New Zealand – sans suit case. Her luggage didn’t make it all the way to the other end of the world yet and will be sent on to Dunedin, after having been found in Brisbane.
She has already met the host family and went out to dinner with the mother of the family and her brother with his wife. Mom said dinner was a casual affair that she felt over-dressed at, since she only had the formal dress she wore while travelling – the rest of her wardrobe is in the suit case in Brisbane. 🙂 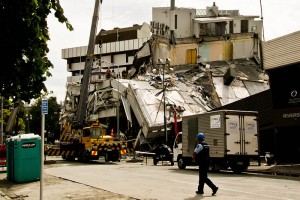 My mother wrote she was slightly shocked when she left her hotel in Christchurch the next morning and felt like she was in post war Germany 60 years ago. She had not really understood before how extensive the damage was after the earth quacks the city has experienced in the last year. The cathedral is in ruins and the public library is housed in a shack. Her trip through town in a double-decker bus was like a cross-country ride in our jeep, as the roads are still in bad shape. None the less she says she really likes the city and admired the grand view of the snow-covered alps in the distance.

Jet lag doesn’t seem to be affecting her and she claims that is due to the homeopathic little spheres she took. Well, who knows?